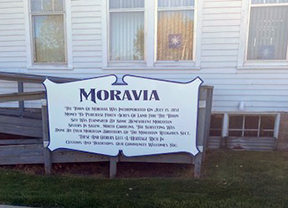 Moravia is nestled high up in the divide between the Missouri and the Mississippi rivers. The plain slopes gently to the east. The acreage outside of town is mainly devoted to ranching today. Most subsistence farming has given way to modern conveniences to stores. In town, as the locals refer to Moravia, it is a close-knit community, which is the best part of living here, says Mayor Roy Miller.

Well, it's a nice little town, says the mayor. “It has a population of about 650,” he adds, filling in the history of this small town in southeastern Iowa. “It was started by a bunch of Moravians from out east (Salem, North Carolina) who came and wanted to buy some land.” Their descendants are still here, 170 years later. Moravia is a town steeped in tradition, but is engaged with the modern world in a struggle to maintain its identity, and find a way to renew and grow the town for the future.

Mayor Miller is the kind of person you can sit down with and find something in common, no matter what your background. He talks candidly about Moravia and his passion for living there. The very successful addition of the Dollar General store is a great example of the type of business that he seeks to benefit Moravia. Roy Miller says the previous mayor and the community worked for years to bring the national chain to town. Success brings its own share of issues too says the mayor as he battles the same issue that all small-town mayors fight; the stop and go places along the highway. For Moravia, sacrificing downtown is not in their plans. Speaking as mayor, his constituents next want a medical clinic; they want another grocery store. We want it for downtown, says Miller.

Downtown Moravia is a mixture of historic brick structures, anchored by the town library at the center of Moravia City Park. This iconic hub is home to the Moravia Community Center, and is where mayor Miller and members of the Betterment Committee want to see development. He hears a lot of talk about “a small cafe or something uptown so they could go up there and have coffee and stuff.”

We would like to see more businesses uptown here, on the square,” says the mayor. He is hopeful that a deal can be worked out for a small clinic and practitioner so members of their elderly population won’t have to drive out of town, Miller says the Betterment Committee is working on a plan with healthcare providers in Centerville and Albia that can more directly benefit Moravia.

The small committee is an active participant in finding ways to make life manageable for those who need assistance, while keeping Moravia looking friendly and welcoming. “I think there's approximately ten people that are members of it and they go around and do different projects for the town. They try to take care of a park and try to help us and seniors out with different things that they might be able to help them with.”

“We have a lot of seniors that live in this town, and I think that makes a lot of the community closer,” says mayor Miller. “I would love to see the town build, to come back like it used to be. I take a lot of pride in this community and the job of being mayor. That's the reason I wanted to become mayor, because I love it,” concludes Roy Miller, mayor of Moravia for the past six years.

Why Would My Community Want To Attract A Remote Workforce