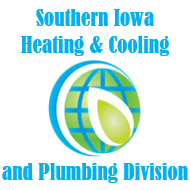 Some of the most successful businesses start up to solve a problem or meet a specific need. That’s certainly the case with Southern Iowa Heating & Cooling (SIHC) in Centerville.

Owner Jesse Fagen was a reluctant entrepreneur. He moved to Centerville with his wife Kelly for a job. At 35, he wasn’t looking to start his own business. But once he got acquainted with people and they learned about his HVAC background, people in the community started asking him to step up to meet the area’s demand for services.

There were five heating and cooling companies in the area when the Fagens moved to Centerville. Within the first two years, two had closed. One other eventually left town, leaving only two licensed companies.

When Fagen opened SIHC in 2014, his honest expectation was to employ himself and possibly one assistant. He figured he’d stay busy and be able to pay the bills. But the business has grown exponentially. Every year since opening, the company has “pretty much doubled in business,” says Fagen.

Besides Centerville, SIHC serves Appanoose, Davis, Monroe, Putnam and Wayne Counties. Fagen notes there are lots of vacation and hunting properties that “keep us very busy.”

Four years ago, Fagen was still answering all the company phone calls. An office staff and a computer system that tracks jobs and helps invoice customers has made life a lot easier lately.

“Demand is huge,” says Fagen. “We were getting three to four calls a day asking for plumbing services.”

After plumbing, the next logical service to be added was bathroom renovations. SIHC now provides complete shower restoration and remodeling, using Onyx showers.

SIHC didn’t even have to advertise during its first three years, customers learned about the company by word of mouth. The community’s response has been “absolutely phenomenal — above and beyond what I expected,” says Fagen.

Today the company has 12 employees (including Jesse and Kelly) and recently built a brand new shop that is quadruple the size of the previous one. The incredible success of the business has been “unexpected” and at times “stressful.” But mostly it’s been “humbling,” according to Fagen.

SIHC’s slogan is “service driven, community focused.” In Des Moines where Fagen relocated from, there was a massive pool of contractors to compete with, so quality work and top-notch customer service was a necessity. He brought that city mentality to his business here and strives to provide the best possible service.

The Fagens are also community-minded. They’re involved in as many aspects of community as possible, whether it’s through charitable donations, event sponsorship or volunteering at events like Pancake Day.

“We’re involved in the community, giving back to the community that supports us,” explains Fagen. “Without them, we’re nothing.”

Why Would My Community Want To Attract A Remote Workforce